And again, these were 'found' in one of the bedrooms where too much sewing/quilting accumulates! There were 16 finished in this pile (no clue how they were going to get donated laying in there!!) and a few more not yet begun.  So I've already got a good pile of still to be sewn pillowcases and need to get those fnished up in addition to the last QOV.  I'm spending entirely too much time couch potato-ing watching the Olympics (loved the little Shib sibs, too cute!). 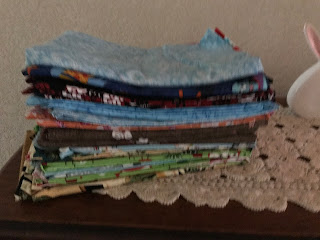 I don't know what took me so long because Amanda made hers in a day.  Obviously it's been much longer on my end but it (the top) is done and measures 69x78.  I know one reason mine took longer is my pitiful sewing skills.  Even though all blocks were using 3.5" strips and all sewed on the same machine and all (I thought) were the same seam allowance, they weren't going together nicely so I took apart what was already together, trimmed the blocks uniformly and sewed them back together again.  That is SO annoying but it's better (not perfect) now.  The back will be made and then off to the longarmer.  One more to go.... 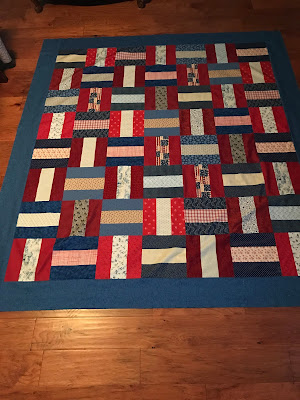 I've been watching the Olympics and just hoping we'd do better in some of the areas but it's all good.  I'd admire Olympians and all they've put into getting there.  My son is off today so we're off to see Black Panther!  I've wanted to see that since it was first mentioned (but then those 'comic inspired' movies are some of my faves).

I made a Valentine quilt and had it quilted but have been unable to find it to hang for Valentine's Day 😭.  It was made like this one but not these colors 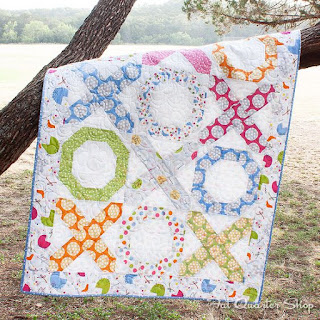 really pathetic that I can't find it.  It just needed binding!

I decided to just share a few more Valentine cuties with you to celebrate the day.  These are just some I found on pinterest that I thought were adorable. 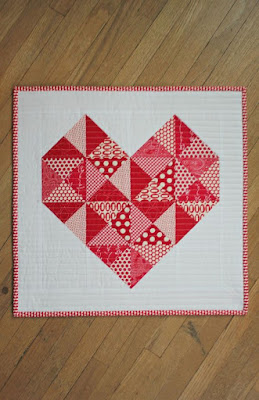 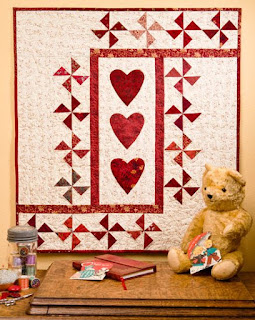 While making the QOVs for the guys in my Sunday School who all served during the Vietnam War, I've tried to make each one unique though I HAVE duplicated a couple of patterns because of the ease of those patterns (mostly the block that was formerly used in the making of the Home of the Brave quilts).  I saw Amanda's quilt and thought that would be a great pattern for a QOV so began digging through the red, white and blue and started one like hers.  The blocks are 9 1/2" so go quickly and the quilt she made is 63X72 (thereabouts) utilizing 56 blocks.  I have half of the blocks done and would like to get it done soon.  Here's a picture of Amanda's 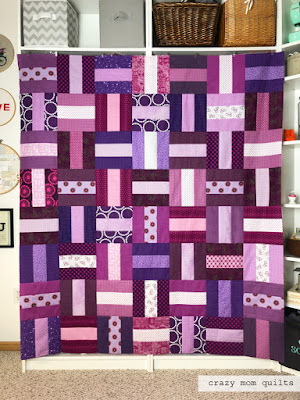 And then I was just poking around on Pinterest and found this cute quilt (called Scrap Strips and Stars by Lisa Sutherland) so I started cutting strips for it!!  I LOVE it!  So these will be two new designs that I've never made for a QOV.  Once I finish up these two new quilts, that'll make the final four I need to present.  But they won't be the last QOVs I ever make.  THAT will continue to happen!!

And just another gratuitous photo of Hooty sunning himself today!  He is SO cute! 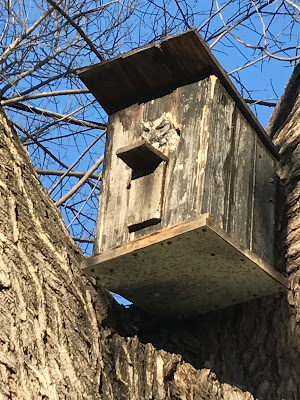 These two QOVs are bordered and (now) pressed and the backings are made.  They're ready to drop at the longarmers..I'll need to give her a call before I just show up!  The funny thing is remember how I've mentioned fairly recently that I've 'found' things (no, still no Valentine quilt)?  Well, I found ONE of the two backings already made!!  LOL  Sure wish that happened more often.  I was digging through my red, white & blue stash looking for big enough pieces to assemble into a backing and I pulled on a blue and lo and behold!  AND it was the perfect size!!  Good grief, was that lucky or what? 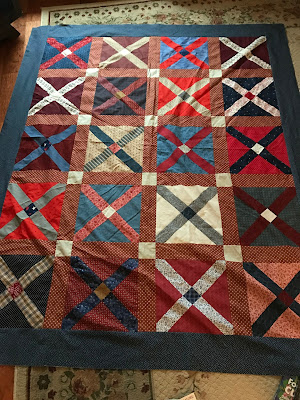 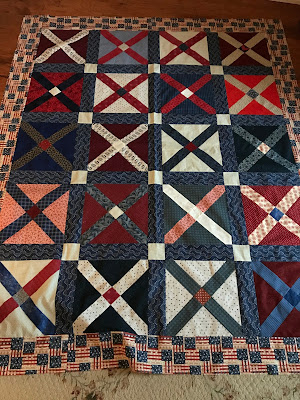 I already know what I'm going to do for #3 and there's another that was started some time ago that I just might use for #4 (although I really love that one and was going to keep it but I seriously don't need anymore quilts languishing in the top of the closet).

I'm making decent progress on the binding.  Worked on this one during the Superbowl (as I wasn't really interested in anything other than the commercials) and finished it up this morning.  I have the binding almost on another..just needs to be joined and done. 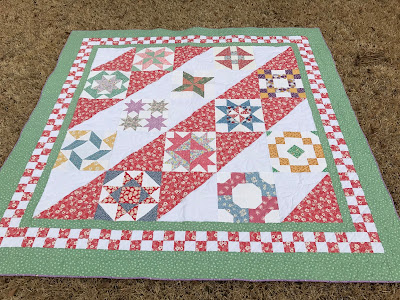 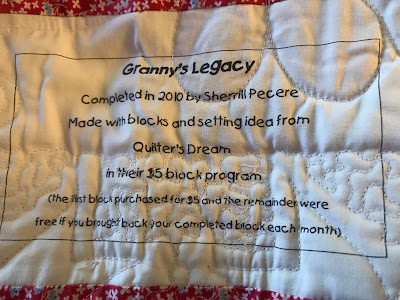 I really should be more diligent to do my labels like this.  Get em done and pieced into the backing and they are there for posterity!  Alas I'm not usually that organized.  But without this label, I wouldn't have had a CLUE when this was made.  I did remember that it was the $5 quilt at my fave quilt shop at the time.  She usually offered two colorways.

Now, I NEED to get the binding joined on the next quilt and get the backings pieced for the two QOV's that are ready.

I actually machine stitched this binding on in Jan. and started hand-stitching it on Jan. 31 but completed the binding last night.  Since it was dark, I waited to get a picture this morning. 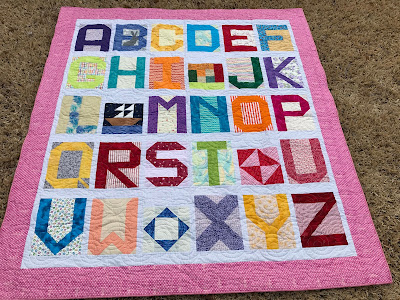 I did this with the Moda sew along awhile back and LOVE the way it turned out.  Not sure what I'll do with it (most likely a future donation) but for now I'll hang onto it and admire it's cuteness.  LOL

And this stack of pillowcases from January wound up having 15 total.  Some will be the cases for the QOVs  I'm GOING to finish this month.  But there are also several more cases waiting to be done so hope to complete more this month.  And I have enough flannel for a few more baby rag quilts so maybe another one or two for February?  We'll see.  Still have 3 (I think) bindings to do. 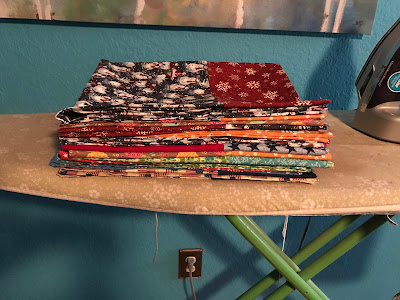 I did manage to get some finishes in the books during the first month of the year so I want to document there here for my 'record books' down the road.  I machine stitched the binding on several quilts and actually hand-stitched these for completed projects 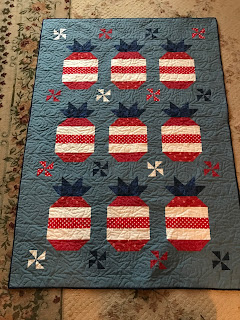 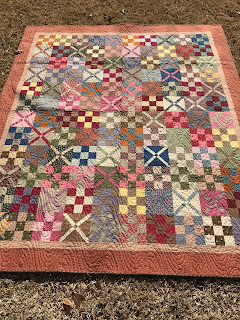 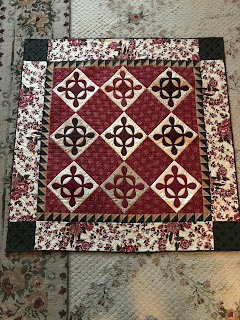 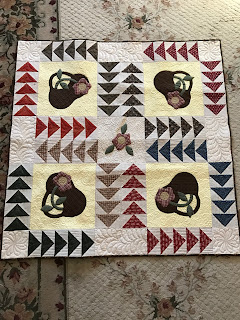 and finished these two rag quilts 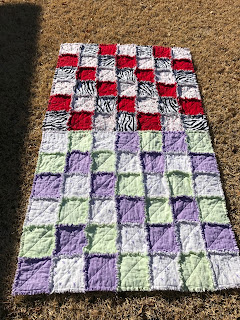 and completed several pillowcases (I took a picture of the entire batch I finished but haven't uploaded yet; these 6 are just a portion of what was finished). 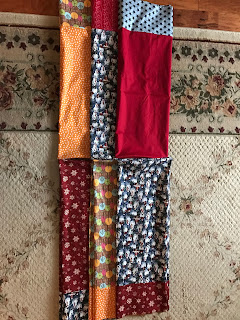 It would be fabulous to get the remainder of that initial stack of quilts bound, finish up at least two of the QOV's and get at least two more WIP's to completion.  Wish me luck! LOL
Happy quilting!! Sherrill at 7:34 AM 3 comments: 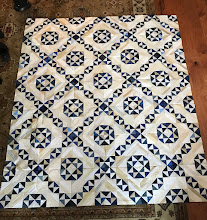